Update 1.1
* Updated JEVN integration script. It now works with JEVN 3.x thanks to its API support.
JENC sales are now reported since the script uses the API.

* Changed the “Server Key=” entry in the _UMconfig notecard to “SalesServerKey=” so be sure to double check that if upgrading.

* Added the “LogSeparator=” entry to the _UMconfig notecard. This must match the Log Separator specified in your JEVN _config notecard. This MUST be changed from the default “-” log separator — I suggest using the | (pipe) symbol. Make sure this is not in any of the item names that you’re selling.

Since the release of the encrypted JEVN 3 vendor system, my previous Sales Reporting product no longer logs sales from JEVN 3.x servers. This is because of a more-than-likely major change to how the JEVN server works. The new version apparently now has an API allowing you to plugin to sales logs, so within the next few days I’m going to look into getting that to work.

I also need to fix the JENC support… objects purchased through a JENC personal viewer are incorrectly logged.

As of this writing, JEVN 2.x works with the Sales Reporting system, and so does SL Exchange.

I’ve added the (much requested) feature to adjust the amount of time between tip reminders, and even disable them completely. I needed to re-work the _config notecard, so previous versions are not compatible.

If you’d like an update, please IM ME FIRST, or else I’ll have a flood of inventory drops and I may miss someone.
Since this is not a copyable item, I am not able to send out automatic updates.

After the rescent JEVN exploit, some of my items were stolen from my JEVN servers. Since then, my JEVN vendors have been offline, and my items were only available for purchase from my own vendors at my main store. It looks as though the problem has been isolated so I’ve brought all my JEVN vendors back online. So if you’ve rescently tried to use a Personal Viewer and it didn’t work, it’ll work now.

*These are provided as-is. I cannot guarantee their functionality with future versions of said products.

END_OF_DOCUMENT_TOKEN_TO_BE_REPLACED

I’ve just open-sourced my Pick a Number casino game. You can find it on SL Exchange and in-world at Union Micro.
END_OF_DOCUMENT_TOKEN_TO_BE_REPLACED

The site layout is done, I think. I tried to carry over the WordPress theme into the forums as best as I could. I also installed the attach mod into the forums, so you can attach files to your posts… but this is a feature I installed for me, not the posters. The point of the forum is for people to get information about Union Micro… it’s not really meant to be an active social environment; although I wouldn’t argue! I got rid of the “Download Engine” and started a Downloads forum, I think that will be a little more intuitive. So, now that the meat & potatoes are there, I guess it’s time to start carrying the old news over from the old news system. I plan on adding more features to WordPress and the forums soon.

Well I’m going to give this WordPress blog software a try… I’m not sure how good it will work out for this type of site, so hopefully I can customize it to work for me. I was using DMA News, and that was working out great, but then something changed on the server-side configuration and DMA News wouldn’t run anymore. After I get all this setup with navigation menus (other than the stupid defaul blog-y ones), and a Union Micro-ized layou, I’ll be copying the old news over from the DMA News database. Anyway, wish me luck!

Animation Director
This brand new HUD attachment is a dream come true for all of the models, actors, and other people in SL who rely on being able to play animations at the click of a button. No more fidgeting with opening animation windows out of your inventory, only to have to re-open them when you choose to stop playing the animation.

You get 2 different Animation Directors in this package: 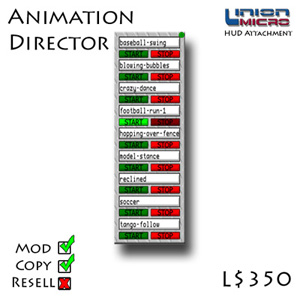 The QuickChat HUD attachment is the essential tool for quick communications. With 4 programmable slots, you can quickly communicate with other QuickChat users at the push of a button. Simply edit the notecard inside, hit the power button, and away you go! All messages are received in format "QuickChat: Owner of talking QuickChat: Message," so there should never be any confusion as to what you are hearing.

This is great for anyone that needs to coordinate an event in-sync with other events such as timing a fashion show, directing an in-game movie or playing a fast paced game in-world where typing just isn’t an option.

*I disallowed channel 0 to: a)prevent chat spam/abuse, b)to prevent lag. If channel 0 is selected in the notecard, the QuickChat will not start.

QuickChat is required by other users to hear your QuickChat text, unless other devices are used to listen on the channel you set. 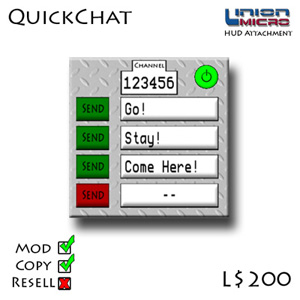 We’ve launched a line of small prefabs. These are not meant to be elaborate 1 million prim prefabs, but quite basic with photo-realistic textures. Our first 2 are meant to be used as shops, but are modable to whatever you want to use them as. They are 9 and 13 prims respectively.